Recently I realised I need to pay more attention to how we review vocabulary in class.  I’m expecting students to take on a lot of new words and I’d like to vary how we recycle our vocabulary lists in class. So, we tried a few different activities.

The first activity was inspired by my Mum. I’d like students to pay more attention to spelling and, of course, I want to encourage using definitions in English (rather than a translation). Coincidentally, my mum came to visit and showed me a game she likes playing on her phone called ‘7 little words.’ I’ve made my own paper-based version to use in class.

First I wrote the clues for the education-related vocabulary we are studying in New English File. Following the original game, I gave students the number of words and letters they need.

Then I created the parts of the words on cards that will be cut up and put in a random order. To do this  I used a simple table in Word.

Students have to use the definitions and find the words from the mixed-up cards. Once they are used to the activity, they could make their own if given the template. The 7 Little Words website includes some example games for other languages including French and Spanish. 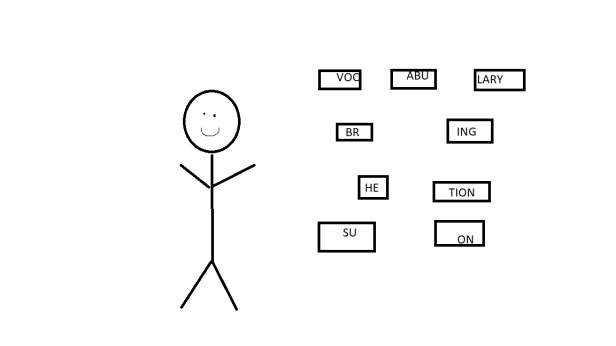 The second activity we tried was making our own flashcards. The students split into pairs and were assigned a unit. The books we are using all have extensive vocabulary lists. From the lists, the pairs chose 10 words they didn’t know and made double-sided flash cards. They had the target language on one side and on the other side of the card, they wrote definitions or gap-fills. The pairs then split the cards so they had five each and, using their five cards, they tested a new partner, who in turn asked them their questions. We used a different coloured card for each unit and at the end of the mingle I collected them and have put them in a bag on a hook on the wall so we can return to them. The plan is to add to our stash over time. I’ve tried various versions of this over the years, but I’m hoping the fact that they were involved in making the cards will make it more successful this time.

Finally, I’ve found it useful to reduce the number of words we try to learn. In the last activity, I handed out a much-reduced vocabulary list and gave students time to learn them in class in pairs. The pairs then competed in a quick-fire vocabulary test to see who could answer the most questions correctly on their whiteboard. I only gave them about ten words to learn and asked about five questions which allowed me to check the answers easily and it kept the activity moving. They seem far more motivated this way than with a traditional vocabulary test.

What are your favourite vocabulary activities? Have you ever managed to create flashcards that work?

This site uses Akismet to reduce spam. Learn how your comment data is processed.